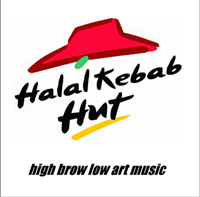 Earth Monkey Productions is proud to release its 10th recording with some quality experimental sound art.

Halal Kebab Hut - Algorithmic Junkestra
High Brow Low Art Music is the debut release of Halal Kebab Hut, a band of seven improviseurs de junk (no they dont sound like Stomp), and was recorded in the cold, dark and final days of 2004. The group is the gastrosonic brainchild of, East London-based composer/improviser/anarchist/teacher/cyclist, Simon Katan, who creates all the algorithmic fodder for the band. This takes the form of game pieces - rigorous, non-linear, rule-based structures that provide differing systems of organisation without prescribing content - that bind the performers actions together into complex networks of interrelations.